As someone who is in her second career, I have had many people in my life who have been mentors, guiding me along my journey. However, I believe there have only been a few people whose impact was so powerful that they imprinted their wisdom upon me forever. I do not know if you believe in magic, but I believe in magical people. I believe that people exist whose bright energy, endless capacity for love, and remarkable resilience make them a little bit more than human. The term Fairy-Godmother comes to mind. I was fortunate enough to be loved by one such person, and she taught me more about life than anyone.

Mitzi Fainariu was a Polish Jewish immigrant who miraculously survived the death camps of The Holocaust and, upon liberation, made her remarkable life on Long Island in New York. She came to know my family in the mid-1960s when her daughter and my mother became friends. A strong bond formed between our two families, the kind that surpasses friendship. The sense of love and loyalty became such that, when my grandmother learned she was dying, she asked Mitzi to “Please, take care of my girls.” Having known loss in a way that most people never will, Mitzi Fainariu took my grandmother’s request deeply to heart. When I was born, I was not without a grandmother. Mitzi Fainariu was my grandmother, in all the ways that matter, and her love sees me through life even long after she has left it.

What did I learn from Grandma Mitzi? I learned that respect must be earned, not assumed; that real love does not have conditions; that the preparation of food is a sacred and magical act. I learned that hugs heal, sarcasm lightens the heaviness of life, and no one messes with the people you love. More than anything, I learned that I have great worth, and anyone who does not see that is not worth

my time. Grandma Mitzi did not suffer fools. She had lived through too much to be anything but honest and to the point. She gave far more than she took, but she did not take nonsense from anyone. She was a proud Jewish woman. She was artistic. She was a feminist. She was a fashion icon. Grandma Mitzi taught me to speak up and speak out in the face of injustice. She made me feel seen and so very special. Through her, I learned that resilience in the face of adversity is required in life. I understood that even the darkest times can be survived, and that joy is everyone’s right. She taught me that there is never a reason for cruelty and kindness is the balm that heals all.

I lost my Grandma Mitzi when my youngest child was just a baby. I felt her loss in a visceral way as if a part of what I knew of the Universe had faded away. She was so powerful, in her less than five-foot frame. Her hugs were medicinal. Her voice was musical. Her love was restorative. I was not sure I would ever feel right in the world without her, but she is not gone. Her fire lives inside of everyone she ever loved. Her lessons endure in the way I live my life. Every time I use my voice to speak out, her strength is with me. When it seems that the world is too tragic to bear, I remember that light is stronger than darkness. When I wonder if I am enough, I hear her praise. Grandma Mitzi persisted in a world that tried to destroy her, and she did so with kindness and strength. She is my greatest mentor, preparing me for life and all its shades of experience. 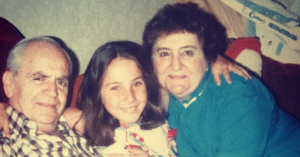